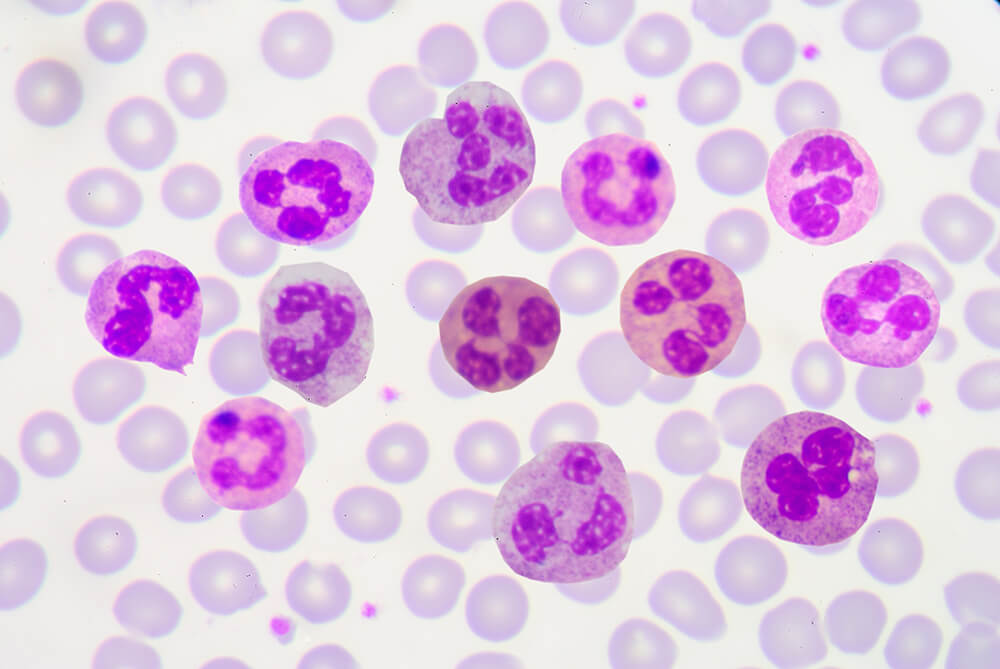 An overview of neutrophils

The most abundant cell type in human blood is neutrophils, often known as polymorphonuclear (PMN) leukocytes. They are widely produced in the bone marrow. In the course of a day, neutrophils enter the circulation, travel to tissues, accomplish their tasks, and are destroyed by macrophages under homeostatic settings. In the innate immune system, neutrophils are essential effector cells. They constantly scan the organism for symptoms of microbial diseases, and when they do, they act fast to catch and kill the pathogens. Neutrophils are known to have three main antimicrobial functions: phagocytosis, degranulation, and the release of nuclear material in the form of neutrophil extracellular traps.

Causes of the high level of neutrophils

Neutrophilia is a condition in which your blood contains a high number of neutrophils. This is a symptom that you have an infection in your body. The most prevalent reason for a high neutrophil count is infection. A high neutrophil count is caused by the majority of bacterial infections, but not all of them. In most cases, viral infections do not result in neutrophilia, but they can result in the early stages of illness. Neutrophilia can also be caused by fungal and parasite diseases. Neutropenia can also be caused by some medications. The presence of neutrophils can indicate a variety of underlying disorders and circumstances, including:

Causes of low level of neutrophils

Neutropenia refers to a low neutrophil count. Neutropenia can make you more susceptible to infection since neutrophils are cells that are part of your immune response to combat infections. Even common microorganisms in your body might cause deadly infections if you have severe neutropenia. Neutropenia can be caused by a variety of illnesses, as well as some drugs. If your neutrophil count falls below 1,500 neutrophils per microliter, you’re at the greatest danger of infection. Neutrophil numbers that are too low can result in life-threatening infections. Neutropenia can be caused by cancers of the bone marrow, such as lymphoma, leukemia, and myeloma. Because chemotherapy and radiation inhibit the production of neutrophils, neutropenia is a common side effect of cancer treatment. Neutropenia has been connected to a variety of medications. This is known as drug-induced neutropenia, and it usually occurs within the first six months of taking the medication. The neutropenia normally goes away within a week after you stop taking the drug.

Neutropenia is characterized by an abnormally low amount of neutrophils. Neutrophils are immune system cells that fight bacteria and other organisms that infiltrate your body. Neutropenia is rarely accompanied by symptoms. People with neutropenia are sometimes only diagnosed when they get a blood test for another cause. It’s most typically seen—and even expected—as a side effect of cancer chemotherapy. However, some people may experience additional symptoms as a result of the infection or the underlying condition that is producing neutropenia. As a result of neutropenia, infections can develop. Mucous membranes, such as the interior of the mouth and the skin, are the most common sites for them.

An absolute neutrophil count can be used to diagnose infections, inflammation, leukemia, and other diseases. The lower a person’s ANC, the more likely they are to become infected. An infection in a cancer patient can be life-threatening and necessitates rapid medical intervention. Families of children with cancer may find that their activities revolve around a patient’s ANC or “counts.” Patients may be given growth factors if their counts are low. These medications are used to boost the number of white blood cells in the body. Patients with neutropenia may need to avoid going to public locations like schools. To reduce the risk of infection, the care team may urge the patient to wear a face mask (particulate mask). In some situations, the patient may need to be admitted to the hospital.
If the ANC level is very low, the doctor may choose to postpone chemotherapy.

Diagnosis and testing of neutrophils

To monitor the neutrophil count in blood, the Absolute Neutrophil Count test is performed by obtaining a blood sample in a medical environment. This is done to determine if the body’s immunity is enough and that it is clear of hazardous illnesses. In adults, neutropenia is defined as a count of 1,500 neutrophils per microliter of blood or fewer, with any value below 500 per microliter of the blood being considered severe. Even bacteria that are usually found in the mouth, skin, and stomach can cause dangerous infections in severe situations. Neutropenia can be short-term (acute) or long-term (chronic). Congenital neutropenia (existing from birth) and acquired neutropenia (present after birth) are two types of neutropenia (develops later in life).

For complete blood counts and chemical panel findings, each lab has its range of what it considers normal. When looking at your results, it’s crucial to know what’s normal for your lab because what’s normal for one lab can not be normal for another. Normal ranges for various tests are also different, depending on age and gender. Neutrophils normal ranges are usually printed with your test findings on the lab report.

How to raise and lower neutrophils levels

Treatment to reduce neutrophil numbers can vary, depending on the cause of neutrophilia. The treatment may include

People whose neutrophil levels have been altered as a result of medications or operations may need to discontinue or amend their therapy.

The underlying cause of neutropenia must be addressed to raise neutrophil counts.

If you have a chronic illness that causes your neutrophil production to be disrupted, you may need to take medications that help your body produce more neutrophils, such as:

To limit the risk of serious infection, people with extremely low neutrophil counts often need to be monitored, given antibiotics, and admitted to the hospital.

A lack of vitamin B12, commonly known as cobalamin, and vitamin B9, generally known as folate, can cause neutropenia. Low neutrophil blood levels can be improved by eating foods high in vitamins B9 and B12 or taking supplements containing these vitamins.

The prognosis for neutropenia diseases is determined by the source of neutropenia as well as the organs involved. Many people with neutropenia develop serious infections, and many of them may require many hospital admissions to help prevent infections and manage life-threatening diseases. When chemotherapy or medicines produce neutropenia, the patient may have remission after the treatment is completed. When left untreated, neutropenia is linked to a high risk of death.

Do neutrophils interact with other cells?

Neutrophils might interact either directly or through cytokines and chemokines, with other immune cells of your body to modulate both innate and adaptive immune responses.

What is the lifespan of neutrophils?

The lifespan of neutrophils ranges from 4- 6 days.

How many neutrophils are produced?

They are produced in the bone marrow in large numbers, about 1011 cells per day.