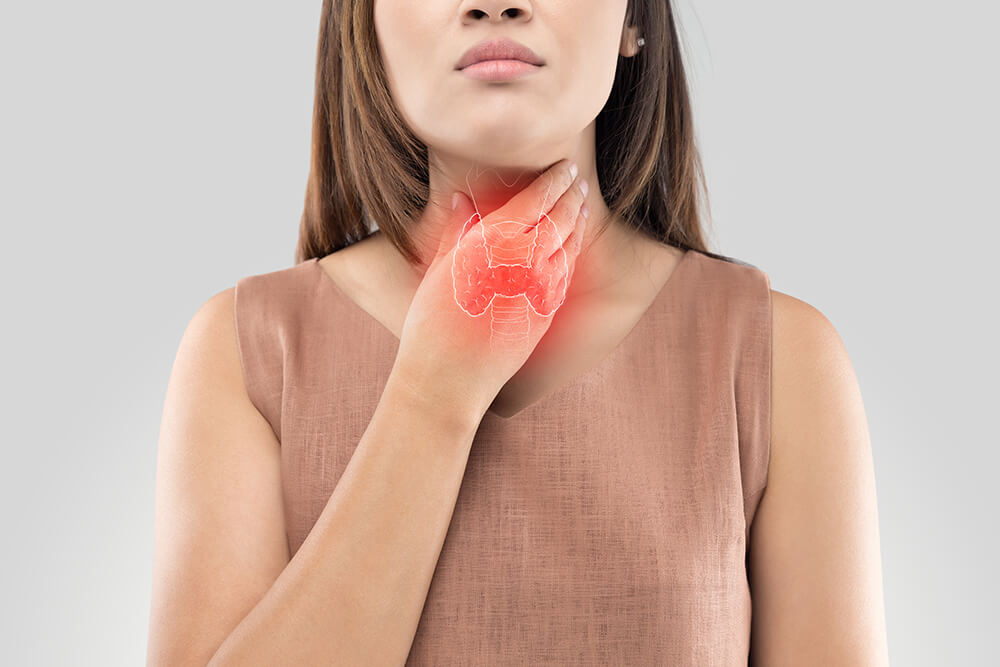 Some of the few symptoms of Hypothyroidism or underactive thyroid where your thyroid gland doesn’t produce enough of certain crucial hormones are fatigue, increased sensitivity to cold, weight gain, and irregular periods amongst others. Hyperthyroidism or overactive thyroid often leads to excess weight loss, rapid heartbeat, anxiety, neck swelling, and increased appetite. If one has diabetes, they are at a higher risk of developing either of the aforementioned.

Thyroid gland and its functions

One of the most common misunderstandings when it comes to identifying the condition starts with an incorrect reference of the same. The thyroid is a gland present in our bodies that is shaped like a butterfly, people often tend to refer to the disease as “Thyroid” which is the name of the part and not the whole condition. Thyroid disease is prevalent in people assigned females at birth, it regulates the body’s metabolism and growth while releasing several life-supporting hormones. Symptoms of thyroid in females can vary from person to person. The thyroid uses iodine to produce hormones that either directly or indirectly affect breathing, weight, heart rate, mood, and digestion. Along with T3 and T4, the thyroid also produces Calcitonin which is involved in helping to regulate levels of calcium and phosphate in the blood. These hormones also control the rate at which your cells and organs turn nutrients into energy and the number of oxygen cells they use.

Thyroid effects in females can differ in severity but if any of the above-mentioned symptoms of thyroid in females continue for a prolonged period it should be brought to medical attention. The functions of the thyroid gland have a lot to do with a woman’s reproductive system, particularly if the thyroid is overactive or underactive. This imbalance in hormone levels may act as an early warning sign of thyroid problems. The thyroid in women can be spotted when puberty and menstruation occur abnormally early or late and the periods end up being irregular often. An overactive or underactive thyroid has the potential to affect ovulation and might even prevent it from occurring at all. The ovaries are at a higher risk for developing cysts if the woman has an underactive thyroid (hypothyroid). Severe hypothyroidism can cause the woman to lactate, while also preventing ovulation. During pregnancy, symptoms of thyroid in women can affect the foetus and cause miscarriages, preterm delivery, stillbirth, and even postpartum haemorrhage while also triggering early menopause.

Who is at risk of getting thyroid diseases?

While anyone can get thyroid diseases, one is at an increased risk if they are a woman who is over 60 years of age. If you have a family history of thyroid disease and already have an autoimmune disease such as type 1 diabetes or celiac disease you are more likely to have the disease. In fact, even a large chunk of the population who have received radiation to their upper neck or chest or have delivered a baby in the last 6 months are well under the territory of being diagnosed with either hypothyroidism, hyperthyroidism, or thyroid cancer.

If left untreated, it can cause a goiter, mild to severe heart problems, depression, peripheral neuropathy, or even myxedema and infertility. Causes of thyroid diseases in females

Symptoms of thyroid for females include extreme weight gain or weight loss, depression, infertility, or other mental health issues. Women are at higher risk of thyroid problems than men and the conditions affecting the thyroid gland can affect women in various ways. With approximately 1 in 8 women will be affected by a thyroid condition in their lives the risk for women is around 10 times higher than for men. One of the many reasons for the widespread impact of thyroid disorders in women is because there is an interplay between thyroid hormones and the hormones that fluctuate during their menstrual cycle. Thyroid issues can happen at any time but they are especially common in women during and after menopause when their hormone levels are changing. Some women may confuse the symptoms of thyroid disorders with the effects of menopause, which prevents them from seeking treatment and further deteriorating their health.

Hypothyroidism symptoms in females can present themselves differently. Most women experience an underactive thyroid by dealing with symptoms like:

Hypothyroidism is when your thyroid does not make enough thyroid hormones and can be caused by Hyperthyroidism treatment (radioiodine), Radiation treatment for certain cancers, or Thyroid removal

It is treated with medications that give your body the thyroid hormone it requires to work normally. The most common medicines are man-made forms of the hormone that your thyroid makes which you might have to take for the rest of your life.

Hyperthyroidism, or overactive thyroid, causes your thyroid to make more thyroid hormone than your body needs. This speeds up many of your body’s functions, like your metabolism and heart rate. One of the most common causes of hyperthyroidism is Graves’ disease, a problem with one’s immune system. Hyperthyroidism symptoms in females usually begin slowly. However, over time, a faster metabolism can cause symptoms like:

Hyperthyroidism also puts you at risk for osteoporosis, a condition that causes weak and brittle bones. This thyroid disease might affect your bones way before you have any of the other symptoms of thyroid in females who have gone through menopause or who are already at high risk of osteoporosis.

Thyroid symptoms in ladies can vary from barely noticeable to extremely painful in no time. Thyroid cancer is a rare disease that only latches itself onto women in their 30’s and is even more common in women over the age of 60. Women are 2 to 3 times more likely to develop it than men. While the cancer is treatable one can still relapse after several rounds of treatment. The symptoms include but are not limited to:

These symptoms could also overlap or be caused by other health conditions, but it’s always a good idea to see a medical professional if the symptoms remain persistent.

In women, hyperthyroidism can be treated by radioactive iodine treatment, anti-thyroid medication, or even surgery. Swallowing a pill with enough radioactive iodine to damage the cells of your thyroid gland might end up in the development of hypothyroidism as a result of this treatment. For Hypothyroidism, one has to take thyroid hormone replacement medication for the rest of their life. No amount of medication or surgery can increase the production levels once it slows down.

With thyroid cancer, the doctor will first surgically remove the cancerous tissue on the thyroid gland or in some cases the whole gland itself. It depends on where the cancer has spread. Diet and nutrition are extremely important when it comes to taking preventive measures for thyroid disease in females. While it may seem small in size, the thyroid gland produces hormones that control your metabolism and how you grow and respond to certain stimuli. Not paying heed to the warning signs of this disease can prove to be traumatic for females. It must be paid attention to and treated as soon as medically possible.

Where is the thyroid gland located?

The thyroid gland is located below Adam’s apple in the lower part of the neck and wraps around the windpipe (trachea). The thyroid gland has the shape of a butterfly. The two lobes or “wings” are attached by the middle portion, called the isthmus.

Which is more common? Hyperthyroidism or hypothyroidism?

Hypothyroidism, or underactive thyroid, is much more common than hyperthyroidism.