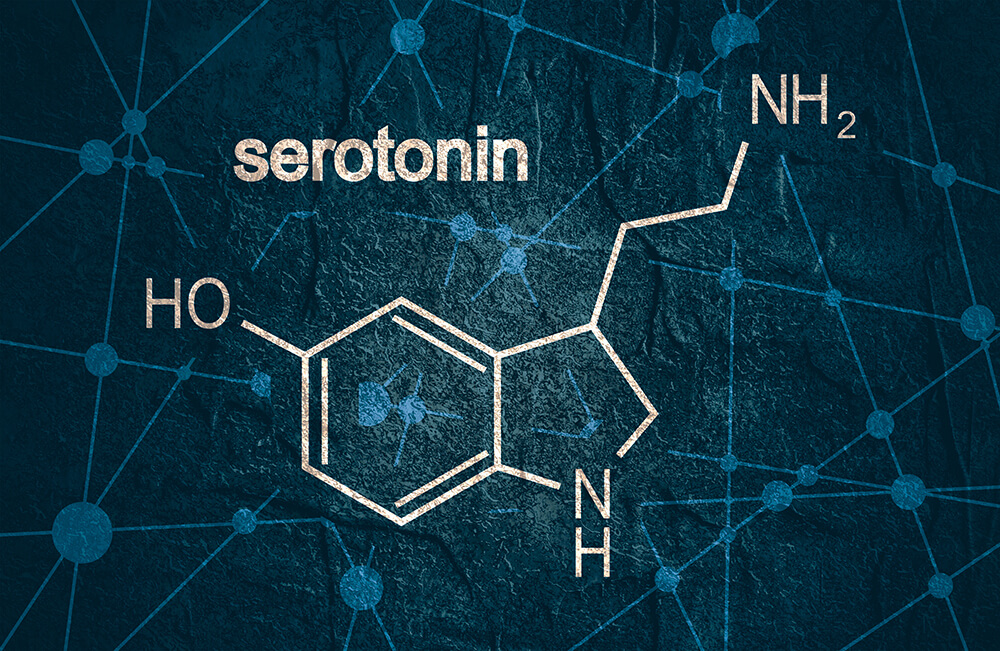 An overview of serotonin

Serotonin is a neurotransmitter produced by nerve cells. It communicates with your nerve cells. Serotonin is mostly found in the digestive system, although it is also found in blood platelets and the central nervous system. Tryptophan, an important amino acid, is used to make serotonin. This amino acid is present in foods like nuts, cheese and red meat, and must be consumed through your diet. Low serotonin levels can be caused by a tryptophan shortage. From your emotions to your motor skills, serotonin has an impact on every part of your body. Serotonin is a naturally occurring mood stabilizer. It’s the chemical that helps in digestion, sleeping, and eating. Serotonin also aids in the treatment of depression, anxiety, wound healing, nausea stimulation and bone health.

Effects of serotonin on mental health

Serotonin is one of the most significant neurotransmitters that influences mental health, making it a viable target for pharmaceutical therapy. Functional neuroimaging techniques such as positron emission tomography (PET) and single-photon emission computed tomography (SPECT) could provide compelling evidence for the link between serotonin and mental illnesses. We focus on evidence linking serotonin to major depressive disorders, as well as other mood disorders, anxiety disorders, schizophrenia, addiction, attention deficit hyperactivity disorder (ADHD), and autism, in this succinct overview. Serotonin is a neurotransmitter that helps with mood regulation and memory in the brain, but it also has a role in other sections of the body.
Serotonin is known as the body’s natural “feel-good” hormone because it helps regulate mood. Because of its effect on mood, serotonin is one of the numerous brain chemicals that contributes to your overall sense of well-being.
Because of the neurotransmitter’s impact on mood, it’s frequently targeted by drugs for depression, anxiety, and other mood disorders. The goal of the antidepressant class known as selective serotonin reuptake inhibitors, for example, is to increase serotonin levels (SSRIs).

Effects of serotonin on the relation between serotonin and depression

The normal range of serotonin

Serotonin levels in the blood should be between 101 and 283 nanograms per milliliter (ng/mL). This benchmark, however, may vary significantly based on the measures and samples analyzed. Thus, you should discuss particular test results with your doctor.

Serotonin levels that are too high could be an indication of carcinoid syndrome. This refers to a set of symptoms associated with malignancies of the:

To diagnose or rule out the disease, a doctor will do a blood test to assess serotonin levels in your blood.

What is serotonin syndrome?

Serotonin syndrome is a dangerous medication side effect. It’s caused by drugs that cause the body to produce too much serotonin. Serotonin is a substance produced by the human body. It’s required for nerve cells and the brain to operate properly. However, too much serotonin causes a variety of signs and symptoms, ranging from moderate (shivering and diarrhea) to severe (diarrhea, muscle rigidity, fever and seizures). If left untreated, severe serotonin syndrome can lead to death. When you raise the amount of some drugs or start using a new one, you may get serotonin syndrome. Combining drugs that contain serotonin, such as a migraine medication with an antidepressant, is the most common cause. Serotonin syndrome is linked to a variety of illicit substances and nutritional supplements. Milder forms of serotonin syndrome may go away in a day or two after discontinuing the medications that produce symptoms and, in some cases, after taking serotonin-blocking therapies.

Symptoms of serotonin syndrome usually appear within a few hours of starting a new medication or raising the amount of one you’re already taking.

Signs and symptoms include:

The treatment of serotonin syndrome

The intensity of your symptoms determines how you should treat serotonin syndrome.
If your symptoms are mild, a trip to the doctor and discontinuation of the offending medicine may suffice. You may need to go to the hospital if you have symptoms that your doctor is concerned about. He/she may request that you spend several hours in the hospital to ensure that your symptoms get better. There are certain serotonin hormones and serotonin tablets that help combat this as well.
If you have severe serotonin syndrome, you will require inpatient treatment.
Now, depending on these symptoms, the process of treatment will be taken forward.

Do men and women have the same serotonin levels?

The rate of serotonin synthesis in male participants is 52 percent higher than in females, when averaged across all brain areas. This is one of the most significant variations between male and female brains that has nothing to do with hormone binding sites. At this moment, the explanation for the disparity is unknown. Women with serious premenstrual mental symptoms have a different serotonin system than healthy women. This shows that symptom-free women’s serotonin systems do not respond as flexibly to monthly hormonal swings as symptom-free women’s serotonin systems do.

Walking, jogging, riding, and swimming are all examples of aerobic exercise that boost serotonin production in the body. The serotonin “high” takes around 30 minutes to achieve. Other forms of exercise, such as yoga, Pilates, and weightlifting, also boost serotonin levels, although not as much.

Every area of your body is affected by serotonin. Serotonin functions keep us going throughout the day. If your levels are out of whack, it can have a negative impact on your mental, physical, and emotional health. A serotonin imbalance might sometimes indicate something more serious. It’s critical to pay attention to your body and discuss any concerns with your doctor.

How does serotonin make you feel?

How do you trigger serotonin?

Can too much serotonin cause anxiety?

Overactivity of the serotonin system has long been linked to mood disorders including sadness and anxiety, which are characterised by excessive withdrawal    and avoidance.