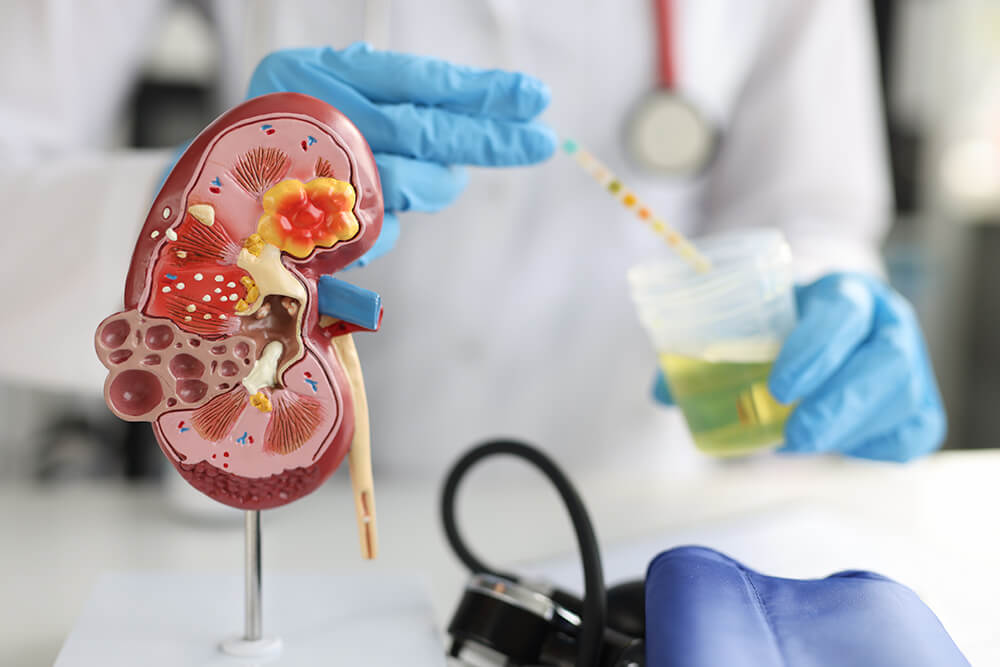 Got a urobilinogen test coming up soon? Curious to learn what it exactly is and what to expect? Read on to find out more about urobilinogen in urine tests!

So, what is this urobili-whatchamacallit? A colourless by-product of bilirubin reduction, urobilinogen is produced in the intestines by bacterial action on bilirubin.

What is Urobilinogen in Urine Test?

As we mentioned, urobilinogen is derived from bilirubin which is created during the process where the old red blood cells are broken down. Bilirubin is used by the liver to produce bile juice, which is a digestive fluid secreted by the liver and stored in the gall bladder.

Urobilinogen is produced by good bacteria in our intestines when they break down bilirubin. Some of the urobilinogen gets excreted by our body in the forms of the stool as well as urine, and some enter the bloodstream, which is entirely normal. This urobilinogen in our bloodstream then returns back to the liver to create more bile.

This is why urobilinogen levels that are low or absent may indicate a blockage of the flow of bile into the intestines. On the other hand, higher levels of urobilinogen might be a sign of higher amounts of bilirubin secretion in our body, which might be because of the breaking down of red blood cells at a faster rate. This, in medical terms, is referred to as hemolytic anaemia. Another reason for higher than normal urobilinogen in urine might indicate liver disease for which the liver has been unable to recycle bile the way it is supposed to.

Purpose of Urobilinogen in Urine Test

So, what exactly is this test used for? The urobilinogen test is usually a part of a urinalysis, which examines the physical, chemical, and microscopical aspects of the urine sample. Urinalysis can be a part of a regular health checkup or because your health care provider might have suspected certain symptoms that require urinalysis or urobilinogen in urine test to gain a proper diagnosis of the cause.

When is a Urobilinogen in Urine Test required?

The urobilinogen in urine test might be recommended by your doctor for a regular health checkup. However, it might also be recommended if your doctor suspects symptoms like nausea, vomiting, loss of appetite, weakness, fatigue, abdominal swellings, swollen ankles and legs, darker urine (the normal colour of urine can range anywhere from pale yellow to deep amber), and frequent itching. These symptoms might indicate liver disease.

However, the doctor might also recommend this test if they notice hemolytic anaemia symptoms, which include heart palpitations, fever, severe headache, fatigue, dizziness, and confusion. Symptoms might also include yellow eyes, skin, and mouth which also indicates jaundice.

Urobilinogen in urine test does not require any prior preparation. However, it is best to consult your health care provider to ensure the smooth conduction of the test.

How is the Urobilinogen in Urine Test Conducted?

Firstly, and quite obviously, the urobilinogen test requires a urine sample. You will be provided with a cleansing wipe and a small container, along with a guideline regarding the proper collection of the urine sample. It is recommended to collect the sample carefully and to ensure that the germs in our skin do not end up in the sample, which may hamper the test results.

During the sample collection, make sure to wash your hands properly with soap or a hand wash and dry them well. Then, you will need to open the container carefully, ensuring you do not touch the inside. Now, use the cleaning wipe to clean your genital area. Start urinating into the toilet and let out some of the urine and stop the flow midway. Now take the container and resume urinating in the container. Make sure you keep the container away from your body. Collect about 30 to 60 millilitres of urine. The container might have already been marked for the required amount. Once done, close the container properly with the cap and hand it to the concerned individual. All you need to do now is sit back and wait for the results to come.

The urobilinogen in urine normal range can be anywhere around 0.1-1.8 mg/dL.

So, what does it mean when your urobilinogen levels show positive? Urobilinogen positive means increased levels of urobilinogen. These increased levels may indicate cirrhosis (which might have caused due to alcoholic cirrhosis, viral disease, and chemicals), Cholangitis (bile duct infection), biliary obstruction, increased rate of RBC breakdown (which may have caused due to hemolytic anaemia, pernicious anemia, malaria, and drugs), hematoma, acute hepatitis, and excessive ecchymosis.

However, lower urobilinogen levels might indicate biliary obstruction, gallstones, severe biliary tract infection, and pancreatic cancer. These lowered levels of urobilinogen might have also caused due to certain drugs, such as insulin, aspirin, chloramphenicol, phenytoin, streptomycin, methyldopa, sulphonamide, and tetracyclin.

Here, you can check the normal, lower and higher levels of urobilinogen.

Q. What is the difference between bilirubin and urobilinogen?

A. Bilirubin is a compound that is formed during the breakdown process of red blood cells (RBC) in our body. Bilirubin is red-orange in colour.
On the other hand, urobilinogen is colourless and is instead the end product of bilirubin.

A. There is the possibility of a false-positive urobilinogen test when the urine contains substances that react with Ehrlich reagents, such as porphobilinogen, sulfonamides, or p-aminosalicylic acid.

A. An extended exposure to light or room temperature may cause a false-negative result for urobilinogen. A false-negative is also possible in the presence of formalin.

Q. Urobilinogen is absent in urine in which type of jaundice?

Q. What is urobilinogen in urine test?

Q. How to lower urobilinogen in urine?

A healthy diet which has a lot of fruits and vegetables will help promote a healthy liver lower the level urobilinogen to normal.